I sat on my finished manuscript for a few months before I thought of which agents or publishers I might send it to.

Initially, it seemed to be quite a specific book to place — a humorous but also wise guide to happiness written by a dog, with photographs and illustrations.

However, it also encompasses lots of different genres: biography, pets, gift book, as well as Mind, Body and Spirit.

Eventually, I decided to narrow my search slightly to find agents and publishers that seemed to have an interest in both pets (quite a popular genre) and Mind, Body and Spirit.

I didn’t know which was the best way of finding a home for my manuscript.

Should I contact an agent directly? Should I go straight to a publisher?

So, I decided to work through both sections in the Writers’ & Artists’ Yearbook, underlining dozens of possibles, before sending a handful of queries out to publishers whose books I’d seen when I was doing research in my local Waterstones.

Then, I stopped. I put my manuscript away and dealt with six months of family illness, the death of one of my dogs and sorting out leaking bathrooms and a rotten kitchen floor.

I was too sad and too busy to care about the lack of responses from agents and publishers.

I think it’s invaluable to have an agent. It’s their job to know the industry inside out, and publishers and their imprints are unfathomable entities to new writers like me.

When life got back on an even keel, I started again.

This time, I decided to send a few queries and sample chapters out to agents. Again, just a handful, because I had a lot of questions, as there always are when you’re thinking about other people reading your work — especially people in publishing.

Would anyone get my book? Would they understand the doggedness of it? Would my talk of little ghostly dogs offering life advice put people off? What if they didn’t like dogs at all, or thought that finding happiness was easy?

Luckily, one of those agents — Jane Graham Maw at Graham Maw Christie — did get my book. She understood it, liked it and wanted to see the entire manuscript.

I was thrilled. So thrilled, in fact, that had it gone no further I would still have been happy.

But again, Jane did like the manuscript and liked it more once I’d made a few changes — mostly making it a much shorter book, which was something I’d never considered.

I made the changes, editing out whole chapters and sections, and it was a better book. So, I had an agent, and a brilliant one too, because within a few weeks she’d found me a publisher: Headline.

This is why I think it’s invaluable to have an agent. It’s their job to know the industry inside out, and publishers and their imprints are unfathomable entities to new writers like me. Who’s connected to whom, and how exactly? How do you know what they’re looking for, or what they’ve just seen and signed?

Agents, though, know precisely who’s who and, more importantly, who’s looking for what and what they’ve already seen.

I know a lot of it is sheer luck, but I think that finding professional help in the industry is the way to go.

My book found it’s home with Headline at the London Book Fair. I was a visitor there two years ago and never dreamed Happy as Harry would find a publisher at this year’s event. I couldn’t be happier.

I didn’t know what to expect, and I still don’t know exactly what to expect up until publication, but my journey thus far has been wonderful.

Everyone I’ve worked with at Headline has been amazing; they’re great at communicating what’s happening, and ask my opinion on each and every step.

What’s more, they are very dog-friendly, which matters hugely when your book is about dogs. I took my dogs (author Harry and his sister, Dottie) with me to the first meeting at Headline’s beautiful headquarters on London’s Embankment, and everyone came out of their offices to take pictures of them.

I grinned happily all the way through the meeting, with one dog on my knee and one trying to escape. Thankfully, my agent was there to ask sensible questions.

This is how it’s worked for me. I know a lot of it is sheer luck – finding an agent who knows someone who wants a specific book at a specific time – but I think that finding professional help in the industry is the way to go.

You can’t easily access that kind of insider knowledge, so why not let them do it for you? 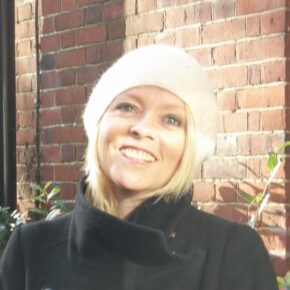 Deana Luchia has been a journalist and editor for over twenty years, living and working in Japan, Canada, Italy and Malta. She self-published her first novel, God & Dallas, a few years ago before studying for a Masters in Professional Writing. Her novel, Happy as Harry, was published in 2017. Now living in London with her children and dogs, she is currently working on her next two novels, and writing and blogging about travel and dogs.