How do you write a funny book?

When I first started writing my novel, I didn’t know it was going to be funny, although I’m not sure what I expected from a premise that begins ‘46-year-old housewife is recalled to her former life as a spy’.

I wanted to focus on the underlying themes of mid-life, and of balancing family and career, but the irony of a middle-aged housewife being so invisible they could work for the secret service without anyone knowing was too delicious to resist having fun with.

I’m lucky enough to have a comedy toolkit tucked away in my closet, thanks to years of improvisation training and countless live shows making stuff up on the spot in front of people. A lot of people assume improv is terrifying, but I don’t think it’s any worse than stand up – actually, audiences actively want you to succeed, and when it all goes wrong (which it does) they are a lot more forgiving than a stand-up audience is!

However, you still have to train to be successful, and good improvisers take the stage with a veritable arsenal of tricks up their sleeves.What I found over the course of writing Tinker, Tailor, Schoolmum, Spy is that many of these can be translated to writing comedy too. I could bang on about this for hours (and often do), but here’s my top three tips of the iceberg:

Don’t try to be funny

In improv, the most important person in the scene is the other person. Listening to their ‘offer’ means you connect as characters. If you fixate on trying to be funny, or pre-plan gags and refuse to change your agenda, the scene tends to fall flat. Allow yourself to be altered and find the humour in the spontaneity and reality of a situation, and the scene will be more likely to succeed.

When I write, I apply the same philosophy, to focus on what’s happening to the other characters in the room, not just my protagonist. Their true reactions and responses are the drivers of my hero’s actions and allow the story to move forward in a more spontaneous way, rather than it be a series of contrived setups and punchlines.

I’ve found that being able to fail with joy and positivity is invaluable as a writer – it makes me a better one each time.

The devil is in the detail

A big part of what makes a great comedy scene is detail. If a player names something at the start of the scene that doesn’t seem particularly important – an object, an item of clothing, a detail something about themselves – and it is called back later by themselves or another character, audiences go wild over the connection.

When I write, I try to identify details that might be useful at a later stage in the book and may also provide a comedic moment if the connection is magnified or exaggerated in some way.

In improv, scenes are disposable. You do them, they go well, or they don’t, and then they are over. Scenes can go wrong for any number of reasons, and there’s not much room for ego, especially in front of an audience. You have to pick yourself up, dust off and move on.

As authors, we spend a lot of time being told the work that we slaved over and poured ourselves into isn’t good enough or needs to change in some way. Accepting it isn’t personal and acting on the feedback you’re given – or indeed recognising things aren’t right for yourself – is a huge part of the job, but one that a lot of people find very difficult.

I’ve found that being able to fail with joy and positivity is invaluable as a writer – it makes me a better one each time – and makes success all the sweeter, too! 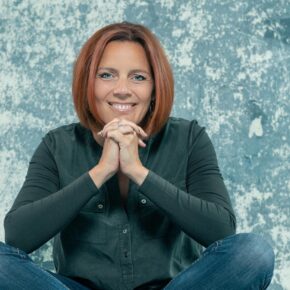 Faye Brann is the winner of the 2020 unpublished Comedy Women in Print Prize. The prize was set up by actress and comedian Helen Lederer in 2019 to recognise witty women writers. Faye’s debut novel Tinker, Tailor, Schoolmum, Spy is published by HarperCollins on 2 September 2021. Visit www.linktr.ee/fayebrann to find out more or follow her on Twitter and Instagram.