A few months ago I decided to take the plunge and booked my ticket to attend the 2017 Festival of Writing in York.

I’d heard that it was a great opportunity to meet other writers, learn about the craft of writing and find out how to get an agent, so I was sold!

As the festival drew closer, I began to think I wasn’t at all ready for this. Although the first draft of my novel was slowly turning into a second draft, I doubted whether agent feedback would be useful at this stage.

Perhaps my novel wasn’t as good as I thought.

A few weeks before the festival, I sent off my submissions to the two agents I had booked one-to-ones with and also entered the three competitions on offer.

The competitions were free to enter so I decided I had nothing to lose, but I wasn’t really expecting anything to come from it.

I was hugely delighted and surprised to find out that I was shortlisted for the Friday Night Live competition.

Along with six others, I would have to read the first 500 words of my novel in front of a festival audience containing delegates, agents and publishers, and would get direct feedback from a judging panel — a little nerve-wracking, to say the least.

I also knew that as a direct result of the competition in 2014, author Joanna Cannon walked away with seven offers of agent representation. The stakes were high!

The whole experience gave me a huge boost and made me believe in my novel again.

I printed off my submission and began to practice reading aloud in earnest to make sure I didn’t go over the allotted five minutes. I arrived in York on the first day of the festival feeling excited and nervous.

After dinner I took my place on the stage with the other writers and found out that I would be second to read.

I was relieved not to be first and also pleased to get it out of the way quite quickly so I could enjoy listening to the other readings.

The audience was very encouraging and I got some great feedback from the judges.

I didn’t win the competition (congratulations to Sophie Snell who won with an extract from her novel, The Pear Drum) but it didn’t matter.

The whole experience gave me a huge boost and made me believe in my novel again — and when an agent approached me afterwards and told me she would love me to submit my work to her, I was thrilled!

I would recommend the festival no matter what stage of your writing.

Also, when chatting to another agent over lunch the next day about my novel and my terrifying but exhilarating Friday Night Live experience (which she had missed) she also asked me to submit my work to her so I think even being shortlisted has given me some kudos.

I would recommend the festival no matter what stage of your writing — I made some great contacts, met some lovely people and came back feeling inspired and motivated to get my second draft completed.

And it’s definitely worth entering the competitions — you never know where it may take you. 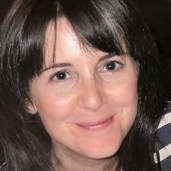 Abigail Johnson is an alumna from the Faber Academy’s 2016 Writing a Novel online course. She is a communications officer and mum to two young boys.