I used to work as an investment banker. But, my husband and I agreed that one of us should be at home when we decided to have children. It wasn’t easy. My husband would leave the house before the children woke and rarely got home before they were in bed.

Then suddenly my children were babies no more. As they grew tall enough to be clothed in uniforms instead of babygrows a new experience beckoned. I had time. Six whole hours every day when I didn’t have to be a mum.

What to do with all those extra minutes? I wrote. Books and stories have been my passion for as long as I can remember – I wrote my first book when I was 12 years old. My first attempt was rejected by every single agent I sent it to, but the limited feedback I got told me that the writing was good, that I should try again. So I did. That one was rejected too and whilst I knew I was doing something wrong, I just didn’t have a clue what that was.

Then I stumbled across an article about an online course run by the Professional Writing Academy. I could fit it in around the children and only four weeks long, so I figured that if I didn’t like it or find it worthwhile then it wouldn’t be too much time wasted. In that month, not only did I discover the lead character of my book, but also a trusted friend and a wonderful tutor who have encouraged me every step of the way.

I went on to do another online course with Faber Academy, which resulted in a fully-fledged manuscript that I felt was better than anything I had written before.

In the intervening months, I researched anything and everything to do with getting published. This included going to an event run by Curtis Brown and Conville & Walsh which gave aspiring writers the chance to pitch their novels to an agent, live and in person.

I drew the golden ticket in the shape of Clare Conville who listened to my pitch, read the first page and told me to submit it to her colleague when I was ready. This is exactly what I did, and was promptly rejected, albeit via a very polite and encouraging email that whilst the novel wasn’t right for her, I shouldn’t give up.

My children were babies no more. I had six whole hours every day when I didn’t have to be a mum.

Over the next couple of months, I sent emails out to fourteen further agents. I had six standard rejection emails and three requests for the full manuscript. Of those, one never came back to me and the other two said that whilst they loved the writing and saw lots of potential, they simply didn’t love the story enough to sign me.

It was horrible. It felt like I had been here already and, despite all my hard work, all the support and advice and lessons learned, I was nowhere nearer achieving my goal. So I put the book to one side and started writing something completely new.

On the last day of November I received a phone call from an editor at HarperCollins asking if I would consider signing with HQ, their new digital imprint. This meant that the book would only be released digitally, but the turnaround was much quicker than the traditional publishing route.

I must admit I hesitated as in my mind the story played out that you secure an agent first, then a publisher. I also spoke to my Faber tutor who told me that at the very least this meant my work would be out there for people to read.

So I said yes, and was promptly given three weeks to do the first round of edits. Somehow I managed to do them in two. Then followed a further round of smaller changes, a copy edit and the final book was released on 29th March 2017.

Having children changes everything, not least your desire as a parent to give them the world. I want both my children to believe that anything is possible, as long as they’re willing to work hard and never give up. To them I am now not only a mother, but also, I hope, inspiration for them to pursue whatever it is that they want most of all. 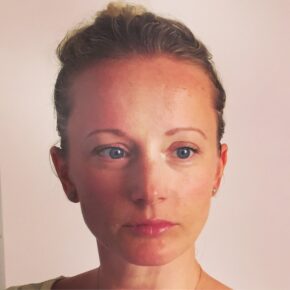 Previously an investment banker, Katherine is an alumna of Faber Academy and published author. Her first book, The Girl in the Shadows, is available now on the HarperCollins’ digital imprint HQ.