It seems only a short time ago I was filling in a form about my writing habits and uploading it to the ‘Sign a deal with an online course’ Faber Academy Online website. I had never been more nervous in my life.

What would people think? Would I be outed as completely delusional? Perhaps when I uploaded my writing everyone would point and laugh. Or, even worse, make kind comments out of sympathy.

I scrolled down the list of sessions on the course and discovered there was a Skype chat involved. A Skype chat. With an actual editor. How in heaven’s name would I get through that without looking like a complete fool?

I decided I would be overwhelmed and humiliated. Everyone would realise I was a fraud, and I was probably better off spending my (very unexpected and rather lovely) tax rebate on ballroom dancing lessons instead.

Strangely, none of these things happened.

Instead, I spent the next few months with a wonderful group of writers, all of whom had experienced the same crises of confidence as I had (except for maybe the ballroom dancing bit). Together, we learned how to plot, edit, critique and cheer each other along.

We learned about technique and dialogue and narrative arcs, and all the other wonderful topics you cover on a course like this, but more than that, I think the course helped us acquire two very important qualities.

The first is discipline. Uploading your work regularly for the group critique is a real challenge, but there’s nothing more motivating than the worry of letting other people down (if you’re working alone, letting yourself down is always far more acceptable).

The second quality is courage. On the rare occasions I admitted to people that I enjoyed writing, I would always follow it up with a small apology:

‘I don’t write anything very interesting/it’s just a little hobby really/nothing will ever come of it’ type of thing.

After a few months of building my courage on the course, I entered a First 500 Words event at a literary festival – and I won it.

Before studying with Faber Academy, I would never have dreamed of letting anyone actually read anything I’d written, let alone enter a competition. However, after a few months of building my courage on the course, I did just that, and entered a First 500 Words event at a literary festival.

I won’t bore you with the details of exactly how nervous I was, reading my writing out to a room full of Very Important People, and how I nearly didn’t enter the competition in the first place… but what I will tell you, is that within 48 hours of winning that competition, I had seven offers of agent representation.

And within a week, HarperCollins had offered me a life-changing amount of money to publish it (the manuscript I nearly didn’t bother showing anyone, because they would laugh and point).

I’m not telling you this to be all showy-offy and flash, I’m telling you because I want to explain how a very small amount of courage made a very big difference to my life.

So when you do this course, study fictive dreams and narrative arcs and have long debates about the horror of prologues, but more importantly – perhaps most importantly – make sure you come away from it with a little more self-belief. It’s out there. You just have to dig around in all the angst to find it.

And who knows what will happen if you do.

As the great philosopher Gabrielle once said, ‘Dreams can come true’. 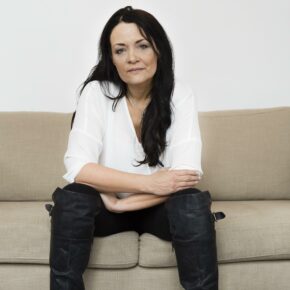 Joanna Cannon started writing her Sunday Times bestselling debut novel The Trouble with Goats and Sheep (The Borough Press 2016) on our online Writing a Novel course with Faber Academy. It sold more than 250,000 copies in the UK alone and has been published in 15 countries. The novel was longlisted for the Desmond Elliott Prize, shortlisted for The Bookseller Industry Awards 2017 and won the 2016 BAMB Reader Award.

Her bestselling second novel Three Things About Elsie (The Borough Press 2018), which explores memory, friendship and old age, was a Richard and Judy Book Club Pick and longlisted for the Women’s Prize for Fiction. Her first work of non-fiction Breaking and Mending (Profile 2019) is based on her experience working as a junior doctor in the NHS.

Joanna left school at fifteen with one O-level and worked her way through many different jobs – barmaid, kennel maid, pizza delivery expert – before returning to school in her thirties and qualifying as a doctor. In 2017, she delivered the Royal College of Psychiatrists’ President’s Lecture. Her work as a psychiatrist and interest in people on the fringes of society continue to inspire her writing, and Joanna frequently returns to the wards as a volunteer with the NHS Arts for Health programme. She lives in the Peak District with her family and her dog.