My unorthodox route to publication

Most people think successful authors follow the ‘write a book, get an agent, get publishing deal, publish the book’ route to having their first book published.

This I did not do. Rattled: Overcoming Postpartum Psychosis by Trigger Press was released on 21 March 2019, and this is how I got there.

I started by writing the book. Tick. It’s about when I had a baby, went mad, then very sad, but got better.

Then – I don’t want to go into too much detail because the publisher concerned is known to be litigious — I unknowingly self-published in the most stupid way possible, in that I paid a sum of money but also signed over the rights.

I’m not sure what I was thinking. Quite possibly still a bit mad and/or sad. Who knows?

By the time the book came out, I wasn’t in direct communication with the publisher as I’d found out the real nature of the ‘book deal’ which I had signed.

Suffice to say, my book didn’t sell, and after a while they pulped the books that were left. We offered her more money too to buy back the rights, and she said no.

I don’t know why. At the time, my husband said we’d look back on this and say, ‘Remember all that trouble you had with your first book?’ But at the time I wasn’t laughing.

Cut to a year later, and my ever-patient husband who read the contract with his fine-toothed eyeballs worked out that the rights would revert to me as not enough books had been sold.

As they’d been pulped that was bound to happen – yay for the inevitable onward march of time. Death here we come!

So, the joyous day arrived when I got the rights back.

I was planning to self-publish and offer the book as a free download for any family affected by Postpartum Psychosis as I’m that kind of generous-minded Guardian-reading f***wit.

As I’d had my fingers so badly burnt, I was planning to self-publish and offer the book as a free download for any family affected by Postpartum Psychosis (PPP) as I’m that kind of generous-minded Guardian-reading f***wit.

Then, on a Facebook group for women with mental health issues who write, one of my compadres posted a message about Trigger Press, a specialist mental health publisher.

And I thought, why not? At the same time, another small publisher came to my attention. So, I tidied up my pitch email and the manuscript and emailed them off.

The other publisher came back quite quickly with a polite no.

A few weeks later I was on a yoga weekend with no phone or internet connection in the Lake District, and after being totally chilled and blissed-out, I was waiting for my train back to London and three days’ worth of emails dropped into my inbox.

One was from Trigger, saying they liked my manuscript and wanted to talk. This was quite an amazing feeling. One I won’t forget in a hurry.

My new agent said she’d love to represent me, and that she thought my book would be of interest to a more mainstream publisher, but if she wanted to find out I’d have to say no to Trigger Press.

Close to the chest

So, we talked, and they offered me a book deal and I was like, ‘Great, I’ll take that!’ I was going to self-publish anyway, so natch.

I emailed a good friend who’s in the biz and told her the news. She messaged back saying, ‘This would be a good time to get an agent. Why don’t you try one of these people?’ So I did.

I got four very lovely no’s and one wonderful yes.

My agent and I had a chat. She said she’d love to represent me, and that she thought my book would be of interest to a more mainstream publisher, but if she wanted to find out, I’d have to say no to Trigger Press.

After much deliberation, writing of pros and cons lists and talks with friends, a comment from one stuck with me: ‘Having this book deal is just for one book, getting an agent is for your whole writing career.’

I wrote a polite ‘no’ email to Trigger explaining my situation. They were great about it, and said they totally understood and wished me the best.

I accepted Trigger’s deal because I wanted to go with a publisher who had experience of working with authors with mental health issues.

A week later I got an email from the Trigger Press CEO saying they were still interested. I put them in touch with my agent, and a few weeks later I accepted a deal with… Wait for it… Trigger.

I wanted to go with a publisher who had experience working with authors with mental health issues. And they’ve been great.

I received an email from Trigger, saying they liked my manuscript and wanted to talk. This was quite an amazing feeling — one I won’t forget in a hurry.

So, this is my route: write a book. Self-publish in an arse-about-tit way. Spend years trying to get the rights back.

End up taking said publishing deal I said no to with the original publishers.

It wasn’t straightforward, it wasn’t neat, but it worked out in the end.

To all the aspiring authors out there: don’t ever pay to get published unless you actually want to self-publish (and that’s fine, by the way, just keep hold of the rights), and whatever you do, keep your arse on the chair and keep writing!

While getting published is in many ways a dream come true, it doesn’t mean all the doubt and insecurity around my writing has been magicked away.

Yes, my book is coming out, but I’m still uneasy around a lot of things.

And it doesn’t end there. I know another writer whose first book sold well and got plenty of good reviews. He got an advance from one of the big players and is now writing his second.

But guess what? He has doubts. Can he pull it off again? Was the first just a fluke?

Your story — one that needs to be heard. All the rest is bullshit. 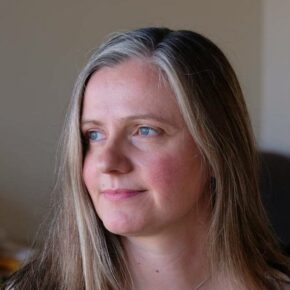 Jen Wight works as a fundraiser for an addiction and homelessness charity and is proud to have raised millions of pounds for social justice causes here in the UK and Australia. She was the city editor for the first ever ‘Not for Tourists’ London guide (NFT).

She has written columns, reviews and features for a wide range of websites and magazines including Mamamia, Mums on the Go, Time Out Sydney and Third Sector. She lives in Hackney, where she grew up, with her husband and son.

Jen was mentored on her MA by PWA director Susannah Marriott. Her book Rattled: Overcoming Postpartum Psychosis was released March 2019..