Just before 9am on Saturday 15 October, a host of eager crime writers gathered outside Shoreditch Town Hall, waiting for the doors to be opened for the first-ever Killer Women Crime Writing Festival.

In terms of surroundings, you couldn’t have asked for a more atmospheric venue — the council chamber, where some of the day’s events took place, was the room where the inquest of the murder of Jack the Ripper’s last known victim, Mary Kelly, took place.

How’s that for inspiration?

Although the festival was called Killer Women (after the group of talented female crime writers who worked so hard to bring it to life), anyone with a passion for crime writing was welcome to attend.

It was good to see a smattering of men in the audience, as well as several male crime writers taking part in the events and panels throughout the day.

The Fresh Blood panel was one of the highlights of the day for me.

I caught up with a few other would-be crime writers in the café before the day kicked off. With a dose of caffeine at the ready, it was time to dive in to the programme and decide which events to go to.

This proved to be quite a challenge: everything was enticing.

Should we go down the workshop route? Masterclasses on writing psychological thrillers and how to pitch your novel or self-publish a bestseller all looked appealing.

Then there were talks by Martina Cole and Val McDermid (also unmissable), film screenings, and sessions about how to get inside a killer’s head, or catch a serial killer.

Would it be possible to sneak into a talk late to maximise the number of events we could go to? “I want to go to this, but I can’t miss that…” was an oft-repeated lament.

But decide we did, just in time to get to the welcome from the Killer Women (who looked dressed to kill in their chic all-black outfits).

The Fresh Blood panel was one of the highlights of the day for me. Debut crime authors Paul Burston, Michelle Davies, Agnes Ravatn and Chris Whitaker joined Sarah Hilary to talk about their journey to publication.

They all had a different approach to writing.

While Chris wrote his first draft in four weeks, writing 5,000 words a day, Agnes revealed that she struggled to get started. It wasn’t writer’s block, but procrastination.

The solution came after a couple of glasses of red wine. She deleted her social media accounts and put pen to paper, moving to an isolated, spider-ridden cabin in the woods for three weeks to avoid any other distractions.

While she’d originally planned to write a sitcom, fear of the dark gave birth to a crime novel.

If you can’t find time, you don’t want it badly enough.

The excitement in the room was palpable as Val McDermid walked on stage. After the publication of her thirtieth book, she joined Laura Watson to reflect on her writing career so far.

Val described writing as a “a constant process of learning and challenge” and talked about how she’d learned from other people’s mistakes, as well as her own — mentally filed away as “things I am never going to do”.

Brilliant, engaging and laugh-out-loud funny, she shared some fascinating insights into her writing life.

She mentioned how box sets get her through the process of writing (an episode of The West Wing at lunch, dinner and before bed was the routine for one of her novels), and how the way she approaches a novel has changed over the years.

She revealed how she used to have a detailed plan, with coloured file cards for different plot lines, which she moved around until she got a narrative structure that worked:

“It was like Countdown — I’ll have two from the yellow pile…”, she said. This method worked for 15 books.

Then, just like that, it stopped working. For her next book, she wrote 65,000 words in nine days two weeks before the deadline. Her editor said it was the best first draft she’d ever done.

One thing Val was clear about is that the process is different for everyone:

“Everyone has to find their own way.” It’s a question of figuring out what works for you, then sticking to it – and that includes carving out “sacred time” to write. “You have to commit to yourself, or why would anyone else commit to you?” she said.

Finding a time of day that’s productive for you is key. She believes that anyone who wants to write should be able to find a couple of hours a week: “If you can’t find time, you don’t want it badly enough.”

While you might not think you can do a lot with such a short amount of time, “by the time you sit down, you’ve thought about it, you’ve rehearsed it, and you’re ready to roll.”

I came away with a bagful of signed books, a host of ideas, and a renewed desire to start writing. 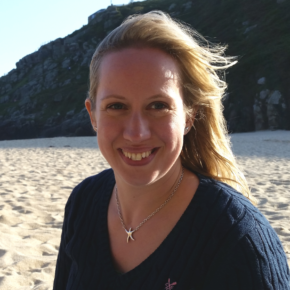 Fiona is a writer and educator with experience of teaching and running courses and creative projects in a range of settings, including schools, colleges, and higher education.

She’s also worked on a range of arts outreach and community-based projects for adults and young people.

She enjoys developing and nurturing online learning communities, working with students to support them on their writing journey, both during their course and in our alumni community.

Fiona has a PGCE, MA in Professional Writing and a Master of Fine Arts. She loves working on unusual creative projects and her work has been published in print and online, turned into audio recordings, performed in front of live audiences and engraved on wood, Perspex and glass. She’s currently working on a middle-grade novel and developing an idea for a picture book.