Lizzie Strasser – Hi, Vanessa, it’s great to have the chance to talk to you! So, to begin, why did you choose to write using a pen name?

Although I’m English, I live and work in Ireland, and while O’Loughlin is a great name there, it doesn’t translate across the world. When I’m in England people really don’t know how to pronounce it and that means that they’re going to have problems remembering it.

When I sat down with my agent to work out what name to use on the book, we decided we’d better come up with a pen name, because the other thing is that ‘Vanessa Fox O’Loughlin’ is enormously long, and doesn’t really fit on a cover!

We came up with ‘Sam Blake’. It’s a name that people can remember easily and sits well on the bookshelf. It’s also one of those androgynous names, so people don’t really know if I’m male or female.

I haven’t found any research to prove it but there’s a theory that men don’t like reading books written by women, so many female crime writers are cunningly disguised with pen names, or behind initials.

LS – Have you got any advice on how to start out in terms of research when you’re writing crime fiction?

They’re the type of people who like doing crossword puzzles, reading a huge amount and watching a lot of crime dramas on TV. They’re often more expert in forensics and police procedure than you might be as a writer, so it’s vital you get that kind of thing right.

As a writer, if you’re Googling you need to double-check your sources, and you really need to talk to people who are in a particular job. I write police procedurals about the Gardaí (Irish police force), and I’m blessed that I have friends who are in the Gardaí.

I have one particular guy who was in the special branch – he’s retired now – who is amazing. He goes over everything to make sure the Garda elements are right, as well as the forensics. It’s vital to get it right – if you don’t, your reader will be jerked out of the story.

You always need to think outside the box – what’s going to interest your reader, and what can they relate to?

LS – What’s your process, and how do you start out? Do you have an idea for a crime scene first, or do you see the murder first?

VFO – Often I start with character. I write police procedurals about a girl called Cat Connolly. She’s about 24, a kickboxer, and she’s Garda level, which means she’s ordinary PC level in Britain.

Basically, I come up with a character — Cat Connolly — and then I think of a crime. With any crime novel, there needs to be high stakes – peril for the characters, and you want a lot to be happening.

Quite often I come up with the last scene in the book, and I’ve got a very clear idea of that last scene. Then I have to get everyone there – which can be harder than you think.

LS – I can imagine! Are there any crime fiction cliches you’d recommend budding writers avoid?

VFO – Well, I think there are an awful lot of slightly older, overweight detectives with alcohol problems.

There are some fantastic authors whose books are very well written doing that, so perhaps leave that to them.

I think people need to be thinking outside the box, but that goes for all fiction, really. You always need to be original — think about what’s going to interest your reader, and what they can relate to.

The key to writing characters is that they have to be empathetic. It’s important that the reader wants to know what their story is.

The key with crime fiction is that it’s pacy and there’s a lot happening, and that it’s quite stripped back in terms of description.

LS – Would you say that, compared to other genres, you have to write your characters differently for crime fiction?

VFO – I think with crime, the key is that it’s pacy, there’s a lot happening and that it’s quite stripped back in terms of description.

You don’t have time and space for mass descriptions about small details — that’s something that there’s room for in literary fiction, but not in crime.

So, from that perspective, crime has to be pacy, have a lot happening and have higher stakes for characters that you care about. It’s an exciting genre to write, as you never know what’s going to happen!

LS – That’s some really useful advice. To wrap up, could you tell us a little about your own books?

VFO – Of course! The Cat Connolly series is a trilogy. The first one is called Little Bones, and it starts off with Cat – our 24-year-old detective — attending what she thinks is a routine break, but she discovers a baby’s bones that have been hidden in the hem of a wedding dress.

It’s a multigenerational book, there’s lots of intrigue and there’s quite a lot of multiple storylines running through it, so it’s a complex book from that perspective. But, basically, it’s the story of how the bones got there, and how Cat discovers who did it.

The second book in that series is called In Deep Water, and that’s recently come out both in Ireland and the UK. Cat’s best friend, Sarah-Jane Hansen, goes missing and Cat discovers a trail that leads her to an international human trafficking ring.

There’s a big ending to Little Bones and we’re left not knowing what’s going to happen, so we come into In Deep Water and pick up Cat’s story.

Little Bones is set over a couple of months, but In Deep Water is set over a very short period of time — it’s an action-packed four days in Cat’s life.

The third book, No Turning Back, is out in Ireland in May and the UK in 2019, and delves into the Dark Web.

Two students from Trinity College are killed in very different circumstances — in what appears to be a hit-and-run and a suicide — but there’s a lot going on below the surface. It also takes Cat’s own story and her relationship with her DI a step further.

LS – Thank you very much, Vanessa! It’s been fantastic to get an insight to your writing process, and you’ve given us some great advice. 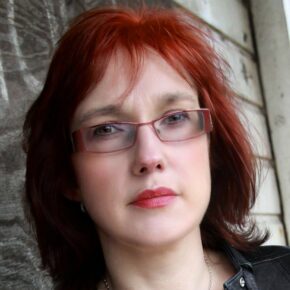 Sam Blake is a pseudonym for Vanessa Fox O’Loughlin, the founder of The Inkwell Group publishing consultancy and the hugely popular national writing resources website Writing.ie.

She is Ireland’s leading literary scout who has assisted many award winning and bestselling authors to publication. Vanessa has been writing fiction since her husband set sail across the Atlantic for eight weeks and she had an idea for a book.

Kickstart a new crime idea and hone your skills in this bestselling genre.