Getting published during a pandemic.

What helped you finally commit to writing a novel?

I had reached the grand old age of forty and although I’d always wanted to be a writer, I didn’t have great confidence in my skills and had never knuckled down and done the work. So I thought ‘if I don’t do it now, then I might never do it’ and decided to give it a whirl. I applied to the Faber Academy: Writing a Novel course and was delighted when I was accepted.

I then had to come up with an idea for a book. I’m very much attracted to the psychological thriller genre and the tutors advised us to write what we like to read. I’m also quite interested in women who subvert the norm.

A female character came into my head who had an older sister who went missing after school. And during her childhood she felt completely overpowered by the grief in the family and that she could never live up to this perfect sister who wasn’t there. I liked the twist that instead of grieving for her sister, she actually still felt very annoyed.

So that’s the idea that I worked on with Tom Bromley and the other people in my cohort to come up with lots of twists, turns, red herrings and cliffhangers, and the result is My Perfect Sister.

Were you a plotter or a pantser?

I’m a plotter and a pantser. I know some writers who have massive spreadsheets over their wall with timelines and character arcs but I don’t work like that. It’s just me and my Word documents. I knew where I wanted to go but some of the scenes in-between I wasn’t sure about, so I’d put in filler and then go back and rework it.

Also, a lot of writing I feel is going with your gut. I remember writing a chapter that I loved but I ended up taking it out because it didn’t fit with the rest of the novel. I think if you read a lot, especially in your genre, you start to develop an instinct on what feels right and what doesn’t.

What can you tell us about the first chapter?

The story starts when Annie comes back to her childhood home (and we find out later that it wasn’t particularly willingly). I wanted to focus on her emotions from the moment she enters this house that she’s not been in for over twenty-five years. She feels again this annoyance, this real sense of being badly done by.

I wanted to grip the reader by setting up questions like ‘Why is she home?’ ‘Who’s Gemma?’ ‘What happened to her?’ ‘Why is Annie so annoyed about it?’ Just placing those clues that will make the reader want to read on.

I was nearly at the point of putting it aside and writing something else when the lady in my local bookshop asked if I’d considered submitting to small independent presses that don’t require you to have an agent.

What were your experiences after the course and getting published?

Tom was great in inspiring confidence in me during the course and so I kept going with the draft and kept in touch with other writers from my cohort, too.

When I eventually pitched to agents, I went through what probably everyone goes through. Some people didn’t reply. Some people sent a standard ‘no, thank you’ or ‘we really like your work, but it’s not quite right for us’.

I was nearly at the point of putting it aside and writing something else when the lady in my local bookshop asked if I’d considered submitting to small independent presses that don’t require you to have an agent.

The next day I submitted to Red Door Press and a few weeks later they asked me to be one of their authors. Of course I didn’t say no!

The paperback came out in June 2020 after a delay due to the COVID-19 pandemic. I had planned a big party in the bookshop but did a Zoom launch instead. And because I was shielding I couldn’t go and actually see it in bookshops for a few months.

What I had to do was learn about social media and how to promote myself online. I joined a Facebook community called ‘Debut 20’ for authors whose books were published in 2020 and we held an online festival and promoted each other’s work. It’s been massively helpful having their support.

But despite the current situation, I keep reminding myself how fabulous it is to finally be published. I recently received an email from a reader I didn’t know who had enjoyed my book (it isn’t just my mum and her mates!).

It’s special to know I’ve written something that’s taken somebody out of their worries for a couple of hours from reading my book. It feels like such a privilege to be able to do that. 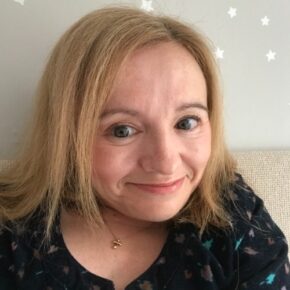 Penny Batchelor is an alumna of the Faber Academy online Writing a Novel course. She is the author of two psychological thrillers published by RedDoor Press: My Perfect Sister and Her New Best Friend.

She is a monthly columnist for The Bookseller and co-founder of the #KeepFestivalsHybrid campaign, which encourages literary festival producers to include an online element, ensuring accessibility for disabled authors and readers, those who are unable or can’t afford to travel and people with social anxiety or who feel the literary world isn’t open to them. Read about the campaign and add your signature to the open letter here: https://bit.ly/3bU4bso