One particular sentence has probably kept you up all night more than any other: the elevator pitch.

Along with a query letter, synopsis and the thing you’d like someone to objectively call a novel, that snappy sentence could be your golden ticket into publishing.

Or so we’re told.

Pitching your one-line wonder was at the heart of the annual Society of Children’s Book Writers and Illustrators (SCBWI) Agents’ Party, held in a swanky corner of SW London.

SCBWI is the professional body for children’s writers. It offers both an international and regional writer network along with events and initiatives such as the annual Undiscovered Voices competition.

Since coughing up the subs earlier this year, I’ve met some lovely fellow writers including heroes such as Patrice Lawrence (recent winner of the YA book prize).

The SCBWI’s Agents’ Party was a surreal, charming experience. A village fete version of Dragon’s Den with a touch of The Undateables, one hundred or so smiley faces mingled with some of the most respected literary agents in the country in the hope of pitching their one-liners over wine (but, sadly, no nibbles).

The life or death importance of the one-liner was dissected at length, because if and when you blag an agent with your single sentence, they’ll use it to help blag you a publisher.

Before the great British queuing system took effect (to gain five minutes with an agent of choice), leading author Sara Grant walked seven of the eight agents through their paces in a lively, if not mostly predictable panel discussion.

Agents pitched their respective agency philosophies, advantaged considerably by having numerous sentences to play with.

There were plenty of nuggets shared about what agents seek, submission dos and don’ts, how to submit your work, pitfalls of the industry and so on.

And, of course, the life or death importance of the one-liner was dissected at length. That’s largely because if and when you blag an agent with your one sentence, they’ll use it to help blag you a publisher.

If you’ve taken a Faber Academy or other writing course, there was little to learn outside of getting to size up some real-life dream-makers. Some of the audience took notes, others nodded in agreement and laughed appropriately.

Most politely waited for the chairs to be cleared (they knew most of the basics too).

Agents were warm, receptive and, above all, what you’d expect; business people with a love of reading.

When the speed-pitching finally arrived two hours later, I was quietly relieved to bump into Gary, a fellow student on my current Faber Academy Work in Progress course, and a few folks I’ve met through SCBWI this year.

I’ve no problem talking with agents, but in truth I’m not ready to pitch my novel. As a potential dry run though, it was good to measure the vibe and eavesdrop on a few pitches.

Agents were warm, receptive and, above all, what you’d expect; business people with a love of reading. Writers that took the time to pitch appeared delighted with the opportunity, often with the response they received too.

One agent had perked my interest – on the panel she’d mentioned an openness to YA sci-fi – but by the time I’d finished swapping stories with other writers the queue for access had grown too unwieldy.

So, I left. The real takeaway came from the earlier panel discussion: your one-liner is important, but nothing beats a cracking story (that agents feel has a place in the market).

Your job is to find that agent.

Besides, an email pitch is typically preferred, which takes the pressure off your one-sentence insomnia. Still, if I was fully equipped and ready to submit, the Agents Party is definitely a route I’d consider next year. 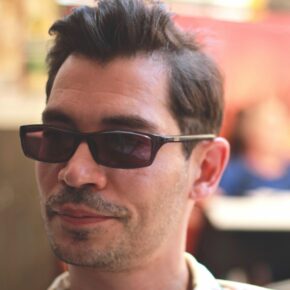 Marco Scarola has worked in marketing and communications for more than 20 years. After attending courses with Faber and CBC, he completed a first draft of his grounded sci-fi-thriller Dark Energy. He’s still working on his one-liner.