I was first made aware of the Crime Writers’ Association Margery Allingham Short Story Competition by a tweet from JK Rowling.

She posted a link to the entry page, adding: ‘Open to published and unpublished authors. Good luck!’

I’m finding shorter fiction helpful to find my voice and experiment with different genres without the commitment of a whole novel (I will soon be making that commitment).

I wrote a Young Adult novel five years ago, but although The Blair Partnership, a literary agency, asked me for a full manuscript, it didn’t go anywhere further and I’ve spent the last few years trying to learn some of the skills of the trade.

From planning to writing to submission took around a month.

Recently I’d entered a few short story competitions with no success, so I visited the CWA’s website through Rowling’s link and began plotting. The brief is as follows:

‘Our mission is to find the best unpublished short story – one that fits into legendary crime writer Margery’s definition of what makes a great story: “The Mystery remains box-shaped, at once a prison and a refuge.

Its four walls are, roughly, a Crime, a Mystery, an Enquiry and a Conclusion with an Element of Satisfaction in it.”’

This is how I came up with the idea for the central character to have Locked-In Syndrome. Their paralysed body is at once a prison, yet holds the mind, which is their refuge.

I have a small group of editors who read my work and make suggestions, no one in the industry; my mum Anne, wife Amy, and a few friends.

I redrafted more than ten times by the time it was finished, always considering character development, setting, plot, and making sure every sentence — every word, even — earned its place in the story.

The word limit was 3,500, so only so many could be included. I submitted it on the day of the deadline. At the time it felt like the most complete story I’d written.

This was the first time I’ve ever had any kind of recognition for my fiction.

About five weeks later, in early April, an email landed in my inbox informing me I had made the longlist. It was brilliant. I was totally stunned.

This was the first time I’ve ever had any kind of recognition for my fiction. It made all the hours over the years in my spare time away from work writing feel worthwhile.

I’d obviously hoped to make the longlist but I did not expect it, so to make the shortlist when it was announced a month later was even more of a shock.

I was invited to the awards announcement reception that was taking place on the Friday night of CrimeFest weekend.

It is an annual festival celebrating crime writing at the Bristol Marriott Royal Hotel. We decided to make a day of it, so Amy and I drove there in the morning and my mum took the train and met us there.

I managed to spill takeaway coffee all over my freshly washed and ironed white shirt on the drive from London.

So when we arrived and met my mum at the hotel, Amy and I headed to the high street to buy a replacement white shirt.

Back at the hotel, a woman who was attending the festival sat down next to my mum and they began chatting.

Mum explained she was there supporting her son who had been shortlisted. It turned out the woman was another Faber Academy alumna, Louise Guest, who said she was rooting for me.

As part of the festival ticket, you get a 14-minute slot to pitch to an agent, which Louise had done that afternoon.

We spent the rest of the afternoon having a few drinks and waiting for the reception to start, as I grew steadily more nervous.

There were hundreds of crime authors — some bestsellers — aspiring crime writers and agents around.

At 6.30pm a private function room hosting the reception opened and filled. They announced a series of shortlists and longlists for crime writing and towards the end revealed the winner of the Margery Allingham competition. Unfortunately, it was not me.

The winner was author Sam Hepburn, who has written several Young Adult thrillers and children’s books, and has recently had her first adult thriller Her Perfect Life published, which she wrote while attending the Faber Academy.

I headed home without the prize to continue with entries for more competitions. But I at least got a new white shirt out of the occasion. 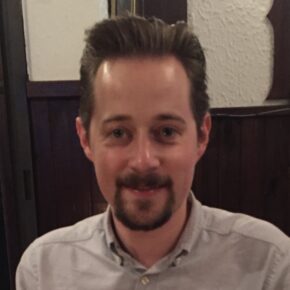 Sam Cunningham is a sportswriter for a national newspaper. He’s a Faber Academy online course alumnus and has been shortlisted for crime-writing competitions. He lives in London with his wife, Amy.