I joined the Faber Academy: Writing a Novel online course in September 2014. By the end, I had the first 15,000 words of a novel: the beginning of a quirky, ghost-story/thriller.

I continued to work on the novel and, once completed, the manuscript was sent to an established literary agency for a critique.

The feedback suggested that the storyline had too many strands, crossing genres, which would be confusing for the reader and difficult for an agent to sell.

After going into a small cupboard and screaming for five minutes I began the rewrite.

Having dedicated so much time to writing the first novel, when I had eventually finished there was a huge hole in my day that nothing could fill. Within a month I started writing another novel.

At the heart of Lady Vita and the Three-Legged Cat is a contemporary Miss Marple character called Clarice Beech. Although over six feet tall, Clarice will only admit to being 5’11. She is a nosy, feisty, nearly divorced ceramicist: a foster carer for an animal charity and a jazz lover.

Anne took me for lunch and told me that she would like to sign me up to the agency.

I studied online and in the Writers and Artists Yearbook the profiles of agents and agencies, appreciating that each agent was looking for something both original and commercial.

While writing to a small number of agents, as well as an individual letter of introduction to each of those on my wish list I attached a synopsis, the first 5,000 words of the completed novel and I also mentioned the next novel, which I had started.

I received the responses within the same week. Two were outright rejections. Although the other three were also rejections they were amazingly uplifting.

My work was described variously as being ‘a beautiful submission’ and ‘one of the strongest submissions we have received recently’ and ‘intriguing.’

While appreciating my writing style, sadly all three echoed the same words: the thriller element was not strong enough.

This, combined with the quirky nature of the novel, would make it difficult for them to pitch. It was not a commercial proposition.

On the positive side, two of the three agents welcomed an opportunity to see the first three chapters of the next novel, when ready.

I went back to work, to polish the beginning of Lady Vita and the Three-Legged Cat and when finished I sent it out, with the synopsis, to both agents. Within 24 hours I was contacted by Anne Williams, from the Kate Hordern Agency.

A week later we met in London, where Anne took me for lunch and told me that she would like to sign me up to the agency. It is impossible to describe how much Anne’s belief in me and my work has boosted my confidence as a writer.

That was in November 2016. The first draft of the novel was completed in April 2017.

When I joined the Faber Academy course I viewed it as going on a journey. I still feel that I am on that journey and enjoying every single minute of it. 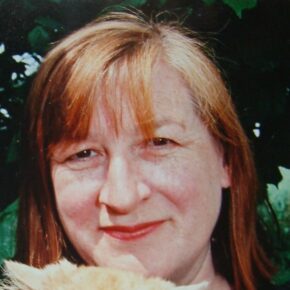 As an artist and maker Kate High has produced work in mixed metals and woods. The contemporary pieces have been exhibited and sold throughout the UK and abroad. She has taught, part-time, for various organisations, the longest period being 17 years for the University of Nottingham. Kate took up writing full-time in 2013. She now lives in Lincolnshire.