Q – Hi Charlotte, thanks for joining us! How long was the process of starting your first draft to having something to submit to your agent? Also, I think you have previously written a memoir.

Have you written other novels that haven’t been published, or was this the first one?

Charlotte Hobson – I previously wrote a memoir, yes; and no, I haven’t written other unpublished books. I’ve been pretty lucky with that so far.

I sold this novel in a slightly strange way because I just showed a synopsis to the editor of my first book, and he persuaded Faber to take it on. The first draft came later.

I had a lucky break, which was that I submitted a story to Granta and it happened to coincide with the theme of their current issue, for which they were one article short. That’s how I got an agent initially.

I always advise people to try for competitions, for Granta, for the BBC short story award and so on. If you get on well there, then you’ll have agents coming to you.

Tutor Susy – For the record, Charlotte’s memoir is my favourite travel writing book, and I use it when teaching my MA non-fiction students!

Susy – It’s my teaching secret – each chapter is perfectly formed!

Q – Where did you learn to write? Are you just a natural, or did you study an MA or do some other course?

CH – I haven’t done any courses specifically, but I studied literature at University (Russian and Spanish lit though, but the same process!).

I think the most useful education for me in writing, however, was working at a publishing house. It demystified the process, and I saw how much work goes into a finished book from all sorts of different people — editor, copy-editor, proofreader and so on.

That somehow gave me confidence.

I was actually very taken aback to find how different it felt to write fiction.

Q – Was it daunting writing fiction after writing a memoir, or did writing the memoir feel quite fictional itself – did you think of yourself as a character and so on?

CH – I was actually very taken aback to find how different it felt to write fiction, even though Black Earth City was a very processed sort of non-fiction – I did shape each chapter as a short story and so on — and I’d written quite a lot of other short stories.

I had to provide myself with all sorts of (artificial) licenses to write my novel. I gave characters names from my own family, for example.

Also, there’s a particular anxiety that comes with writing historical fiction. Not just ‘am I getting this right?’, but ‘do I have the right to tell this story?’. My novel is set in Russia, in 1918, so it’s obviously very far from my own experience.

However much research I did, it was hard to feel I was really allowed to speak for these people.

Q – I’m not writing historical fiction, but from working as a journalist I feel a huge responsibility when I write anything about people. I have to get it right, as they’re entrusting me with their story!

CH – Of course, and my experience in Russia taught me how passionately people want their story to be heard. That was one of the ideas underpinning my novel.

I felt that this was a story, very relevant to our lives today, that hadn’t been told.

Q – Did you plough through other books of (at that time) contemporary Russian authors?

CH – Absolutely. There are hundreds of contemporary memoirs, simply because it was such an extraordinary time. Everyone felt compelled to write their version, and I read a huge number of them.

I also read some truly terrible books. For example, a famous novel called Cement is about a romance in a cement factory.

My grandfather was Russian and many of his relations were killed in the 20s and 30s, so I grew up with a firmly anti-Bolshevik mindset.

But, when I went to live in Russia myself and saw the collapse of the Soviet Union, I became fascinated by the moment of idealism at the very start of the Soviet project.

Q – Charlotte, you’ve been brilliant! Thanks for the insight, passion, and sense of fun.

CH – Thank you all – I do wish you the best of luck with your books. I always think it’s worth remembering that without writers, publishers and agents would be out of a job.

They can be so snooty, but really they are entirely beholden to all of you!

Read part one of this Q&A session. 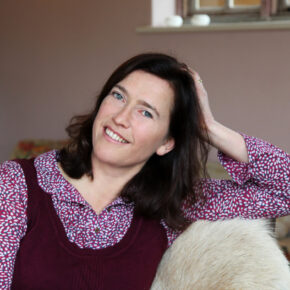 Charlotte Hobson’s first novel, The Vanishing Futurist, a historical novel set in revolutionary Moscow, was published earlier this year by Faber and Faber. Antony Beevor described it as ‘breathtakingly original, luminously intelligent and impossible to put down. A great novel by any measure.’ Her first book, Black Earth City (Granta 2000) won a Somerset Maugham Award and was shortlisted for the Duff cooper Prize and the Thomas Cook Travel Book Award. She lives in Cornwall with her husband, writer Philip Marsden, and their two children.