Q – Thanks for joining us, Irenosen! As you’ve already had a taste of success, what was the hardest part of becoming a published writer?

Irenosen Okojie – Thanks for having me! That’s a good question. In the early stages, doing the various drafts and feeling somewhat isolated was difficult for me. That’s why I urge people to join a writer’s group or sign up to a development agency — which is what I did. It helped a great deal!

Q – What is a development agency exactly, and how did it help you?

IO – I was on a mentoring programme, which meant I got support from a published author and spent time with other emerging writers.

There are writing development agencies across the country that work with writers at every stage — Spread the Word and The Literary Consultancy are two examples.

I received mentoring and accessed workshops and networking events. It made navigating the literary scene a little easier, and I’d certainly encourage people to sign up.

Q – How many revisions would you say is optimal?

IO – That’s tricky, and it depends. It’s different for everybody. I did four different drafts of my novel over several years – by the time I got to my final draft I was sick of my own book! — but you may write more quickly.

By that point, though, you’re so close to achieving what you wanted and you push through.

In every draft your story gets stronger and stronger, and that’s what keeps you going; the writing aligning with the vision you had for it. When that happens, it’s a special feeling. It all feels worth it.

For very worthwhile extra assistance, I’d encourage you to show your work to another writer or professional for guidance.

There’s an agency called Cornerstones that do similar things to The Literary Consultancy – it’s good to have as many options as possible.

Also, if you manage to snag an agent after, say, a second draft, they’ll be able to tell you when it’s ready to send out to publishers.

Definitely get a perspective other than your own so that you don’t send prematurely and do yourself a disservice.

Set yourself a target or structure and stick to it without fail. This is the only way to produce a first draft.

Q – Do you have any advice for getting through the first draft? Is it best to have a word count target each week to make sure that you keep progressing?

IO – Set yourself a target or structure and stick to it without fail. This is the only way to produce a first draft. You have to be really disciplined. I write three days a week — two hours in the morning and then an hour at night.

For me, it helps to stagger my work but keep it consistent. Before you know it, you’ll have a draft!

Q – How different is your published book to your first draft? Was it just tweaking, or did you have to make major changes?

IO – There were some big changes in parts of the novel. It’s set in three different time periods, so structurally it was quite demanding. The issue I had was for it not to seem like three separate books. I managed to tweak that in a later draft.

However, one section stayed the same from the first to the final draft! It all depends, but do the work so it’s as strong as possible.

Follow advice that chimes with aspects you were unsure about instinctively. If you felt your dialogue was a bit wooden in parts and somebody gives you that same feedback, it means you need to change it.

Q – Which writers have inspired you the most, and what are you reading at moment?

I’m currently reading Her Body and Other Parts, a collection by Carmen Maria Machado – it’s fantastic!

Q – I find that there’s a lot of conflicting advice regarding drafts, so I’m still left wondering how to change them. What do you do?

IO – First of all, you have to take a break from your work before you return to assess what the manuscript needs. Also, follow advice that chimes with aspects you were unsure about instinctively.

For example, if you felt your dialogue was a bit wooden in parts and somebody gives you that same feedback, it means you need to change it.

Always bear in mind what your intention for the work is. Write this intention down and return to it. That way, you don’t write a completely different book. It’ll help keep you on track.

Absolutely trust yourself and your vision. You’ll have to collaborate with an editor and you should definitely take advice that’ll make the book stronger, but don’t be forced to write something you didn’t intend to write.

Also, have fun writing that first draft. The second draft is when you start thinking about revisions. You want to enjoy the process and see it as a space to explore.

That first draft is really to show you can do it, and you can rework later. The important thing is you get a feel for the story, the characters, the plot – you can write a novel!

Q – When the first draft goes down, I find it gets set in stone and I have difficulty making changes…

IO – I fully understand. This is why breaks from the manuscript are also important. You get to see it with fresh eyes, and hopefully you’ll also have a new excitement for it. That first draft is really to show you can do it, and you can rework later.

The important thing is you get a feel for the story, the characters, the plot – you can write a novel!

Once that happens, let that give you confidence going forward. Remember, every book you see on the shelves had similar issues and went through several drafts.

Q – Does the experience change the second time round?

IO – As someone who’s currently writing their second novel, I can tell you it’s just as terrifying as the first time – but I’m writing through the fear and turning it into excitement!

On that note, I tend to suffer with writer’s fear rather than writer’s block, and I’m sure many others do too. I’m learning to manage this by sticking to a structure – once I’m in that writing space, the characters take over and I forget about everything else.

Some days the fear isn’t there, and it usually comes when I’ve had quite a long break away from writing.

Don’t let anyone make you feel your writing doesn’t deserve space. It absolutely does. Stay positive, passionate and keep writing.

Q – Have you ever doubted your story? If yes, how do you manage self-doubt?

IO – It does happen, but the truth is my short story collection is quite weird, dark and bonkers. I had to really believe in my ideas and my vision to see it through. My excitement for writing each story kept me going, along with showing range and versatility.

You have to build your confidence and writing regularly is essential for this. Don’t let anyone make you feel your writing doesn’t deserve space. It absolutely does. Stay positive, passionate and keep writing. Good things will happen.

Q – Thank you, Irenosen, for sparing the time to chat with us. Good luck with your second novel!

IO – Thank you for having me, and to everyone for joining in the conversation! 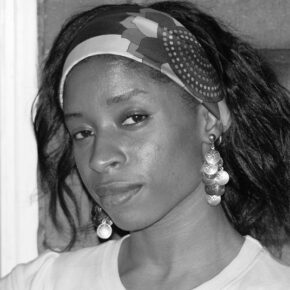 Irenosen Okojie was born in Nigeria and moved to England aged eight. She attended Gresham’s Boarding School in Holt, Norfolk, for several years before becoming a pupil at St Angela’s Convent School in east London.

Along the way, she has worked as a freelance writer, Marketing Assistant and Editorial Assistant. She is a currently a freelance Arts Project Manager and Coordinator.

Her debut novel Butterfly Fish, published by Jacaranda Books, won a Betty Trask Award and was shortlisted for the Edinburgh First Book Award. Her short story collection, Speak Gigantular, was shortlisted for the Edgehill Short Story Prize, the Jhalak Prize, the Saboteur Awards and nominated for a Shirley Jackson Award. It was selected by film director Carol Morley as an Observer Summer Read.

Irenosen lives in east London, and is the Prize Advocate for the SI Leeds Literary Prize.