You often don’t know what you’re looking for until you find it – the gems and details that will bring a place or a person or a scene to life.

So, I’d say to try and speak to people, or travel to the place, if that’s possible, and generally immerse yourself in the world of what you’re writing as much as possible.

Q – Hi Lucy, and thanks for joining us again! What do you consider to be research? How do you get started on an idea, and what different kinds of research do you pursue?

Lucy Caldwell – A lot of it is just spending time with the character’s voice, her (it’s nearly always a her) mood, her consciousness, just letting myself be open to her in my day to day life. A sort of channelling, I suppose.

In terms of more formal research, I was commissioned – for example – to write a short play a few years ago for a theatre company that wanted a story from the New York Times.

I read the paper online every day for weeks until one story jumped out at me – a trainee luthier on the West Bank, Palestine. I thought that it already had everything I needed.

I could have started writing it – I almost did – because I grew up playing the violin, and so thought that my own experience and a bit of Googled research could be enough.

But, I followed my own advice to students of never trying to take shortcuts, and I arranged to meet with a luthier and go to his workshop.

‘What do you want to know?’ he asked when I turned up, and I asked him just to take me through a typical day, or typical repair job.

He said: ‘There’s nothing a violin can’t recover from, apart from fire, because once it’s burnt it’s gone forever.’ That line made it verbatim into my play.

And that was only the start of it. You often don’t know what you’re looking for until you find it – the gems and details that will bring a place or a person or a scene to life.

So, I’d say to try and speak to people, or travel to the place, if that’s possible, and generally immerse yourself in the world of what you’re writing as much as possible.

However, there’s a balance between doing useful research and using it as a crutch – knowing when you’re using ‘research’ as a way of not having to write.

So much of writing is editing, and you can’t do that until you’ve managed to get something, anything, down on the page!

I tend to live with an idea for a while, as a secret world, before even beginning the more formal ‘research’. Then I read as much as I can, online and in books – and then go into the world as and when it’s appropriate.

Q – I suppose there’s focused, determined research, and then there’s the stuff that you allow to filter through in ordinary daily life.

LC – I think I tend to live with an idea for a while, as a secret world, before even beginning the more formal ‘research’.

Then I’d read as much as I could, online and in books – and then go into the world as and when it’s appropriate.

My students are always encouraged to think of Stef Penney, who won the Costa with The Tenderness of Wolves, saying that interviewers asked her incessantly how she wrote about wide-open spaces when she suffers from a form of agoraphobia and wasn’t able to travel to Canada to research it.

Not once did someone ask her about her inability to travel back in time.

I have been working on a play recently about young women becoming nuns, and I’d done a huge amount of research and written a draft, but it somehow wouldn’t come fully alive.

Then I went and stayed for a couple of nights in a monastery (as it happened, rather than a convent).

I got what I needed – the monks in full garb after Vespers, reciting solemn Latin graces, then tucking down to eat fish fingers with lashings of ketchup because they took it in turns to cook and the ‘chef’ that night was useless.

That would have been no good to me at the start of the process when I had a whole world to create, but I needed to go back and find exactly that sort of detail out then, at that moment. So, research happens alongside the writing, too.

Crime fiction has long been the closest the Northern Irish have had to a Truth and Reconciliation Commission, so it’s a fertile place for all sorts of writing.

Q – How does it feel to have the literary spotlight on your home country?

LC – It feels as if Northern Irish literature is really having a moment – and Anna Burns’ Booker prize win lifts us all up and draws attention to us all. It is an utterly extraordinary novel, if you haven’t yet read it.

I wouldn’t say it’s ‘difficult’ at all, just that you have to tune in to the narrator’s voice and to her wavelength. But when you do, it carries you away.

Northern Ireland is a really interesting place at the moment, because we’re now far enough from events of the Troubles for novels like Milkman to come through, which is the deeply-felt product of years of processing lived experience (see also Paul McVeigh’s The Good Son) and there’s also a new generation trying to insist on the need for new stories, new narratives, too. The tensions and contradictions make for an interesting place.

Crime fiction, too, has long been the closest we’ve had to a Truth and Reconciliation Commission, so it’s a fertile place for all sorts of writing.

Q – Do you draw a distinction between voice for stage and voice for page?

LC – It has to do with the level of subtext. When you’re writing drama, you’re not really writing what the characters are saying – it doesn’t really matter what they’re saying – it’s what they’re doing to each other, consciously or not.

You’re writing the underlying dramatic action of the scene, if that makes sense, and so you have to write it with the idea of bodies in a room, and with stakes high enough to merit that.

For stage I write rhythm more, and inarticulacy more – it’s more of a pure act of ventriloquism, I think.

On the page, you are literally writing the subtext more. You are describing physical action, or setting, or place. I have occasionally adapted between forms, and drama eats plot a lot quicker!

The key to good character, I think, is to truly inhabit them, to live them or to find the point where your own life or lived experience touches theirs and draw on that.

Q – Do you ever have problems developing characters in short stories? How do you go about really making them come off the page?

LC – Character is one thing I can do – I am useless with metaphor, not great at elaborate description, the sort of furnishing-a-room that some writers are very adept at, but I can do character and atmosphere – though I could rarely tell you what my characters look like.

If you look through my novels, I sometimes clunkily give descriptions because people have said it would help picture them… I think it’s because I always experience things directly through my character’s…I was going to say eyes, but it’s deeper than that.

So, the key to good character, I think, is to truly inhabit them, to live them or to find the point where your own life or lived experience touches theirs and draw on that.

Tricks you can use are to work out the specifics of their life and world. Do timelines. Work out when they were born, exactly, and what their first memories would be.

What was the first single they bought? What was the house they grew up like? All of that sort of thing, the accumulation of detail which might spark things and make it easier to imagine them.

Also, if ‘character is action’, then letting yourself play with their greatest secrets, their shames, their fears, their desires, lies they’ve recently told, things they’ve done, can unlock things for you.

Q – Lucy, thank you for joining us!

LC – Thank you for having me!

This question and answer session was held with Faber Academy alumni. Follow the link to learn more about Faber Academy’s Write a Short Story in a Weekend online course, on which Lucy Caldwell is a guest author. 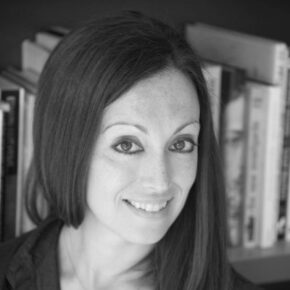 Lucy was born in Belfast in 1981. She is the author of 3 novels, several stage plays and radio dramas, a collection of short stories, and is the editor of the anthology Being Various: New Irish Short Stories (Faber, 2019).

Awards include the Rooney Prize for Irish Literature, the George Devine Award, the Dylan Thomas Prize, the Imison Award, the Susan Smith Blackburn Award, the Irish Writers’ and Screenwriters’ Guild Award, the Commonwealth Writers’ Award (Canada & Europe), the Edge Hill University Short Story Prize Readers’ Choice Award, a Fiction Uncovered Award, a K. Blundell Trust Award and a Major Individual Artist Award from the Arts Council of Northern Ireland. She was elected a Fellow of the Royal Society of Literature in 2018.