Q – Hi Rachel, it’s great to have you here. Now that Black Rainbow has been out for a few years, has your relationship to the book has changed?

Rachel Kelly – A pleasure! I look back at Black Rainbow as the grand old daddy of my publishing career. It’s where it all started. I feel even more grateful to the book as it’s been the platform on which I’ve been able to build a writing career.

I had to write it first, though…

I don’t think any other book I could ever write will mean as much to me. It’s so personal. The others are still personal, but less so. In some ways, I wrote it for me. My subsequent books have been written more with the reader in mind, if that makes sense.

RK – Yes, most definitely. What I’ve learnt is that you are aiming for space on the shelf – several books if possible! The reason is that to keep sales going of earlier books you need to write new ones.

Also, Amazon links them together which makes a massive difference. Although it was well received, Black Rainbow didn’t sell that well – not by the standard of Walking on Sunshine, anyway.

I’ve been lucky, too, as ReLit took the book up and used it on an online course for Warwick uni. As it was on the reading list, it got a sales boost.

Q – I often wonder what the triggers are when people suffering with debilitating mental health issues are finally able to ‘choose life’. In Black Rainbow, it seemed to be a chance exposure to poetry. Do you think a lot of recovery stories are triggered by chance events?

RK – I do believe in that, now you’ve mentioned it. It’s made me think about it, and a chance event can certainly tip you over the edge – in the right direction.

For me, throwing a party was a trigger for the second major episode, but probably to stay well you need several chance events to work together.

Q – Do you think if people are prepared to enter into the depths with you in Black Rainbow, it could have more lasting effects for many readers than Walking on Sunshine?

RK – Yes, I think there is a much deeper connection with readers in Black Rainbow. But then, although Walking on Sunshine is done with a light touch, it’s actually underpinned by quite a lot of serious research, as well as my workshops.

In some ways seeming to write with a light touch is harder than writing something harrowing.

I learn a huge amount from the people in the workshops.

Q – Do you already have the next book in mind?

RK – Yes, I’m planning a sequel to Walking on Sunshine, Singing in the Rain. Or, if the cookbook does well, another cookbook. Perhaps even a poetry anthology…Anything goes!

Q – Have you found how you run your workshops, and the types of exercises you do has changed in any way – have the books influenced them?

RK – I learn a huge amount from the people in the workshops. I find having a grass roots connection with people who are finding life hard is essential. It grounds me, helps keep me steady, and connects with what’s important, so it’s crucial for my mental health.

The publicity and sales stuff actually makes me very anxious. So, it’s more that the workshops have influenced the books, by learning what helps people, trying out their strategies, and sharing what helps me.

In fact, I’ve decided to try and do more workshops next year. Though I love writing, I love connecting with others too, as writing can be lonely and I’m very sociable. That’s why I love sessions like this!

Q – Your relationship with George Herbert interests me.

W.H. Auden said that he was one of the few poets of the past he could imagine having a friendly chat with, and Andrew Marr took him on board seriously while recovering from his stroke, even though he shares none of his religious beliefs.

It seems his inner dialogue and his experience of light and dark helps many of us to relate better to ourselves.

RK – Frankly, I’m obsessed with George Herbert. I rely on him all the time — if I’m anxious or insomniac I recite his poems. I think he’s the divine speaking!

Though I am Catholic, it’s not just about faith. It’s about the magic of his language, the feeling of not being alone, and replacing my negative thoughts with his amazing sense of compassion, forgiveness and our common humanity.

As you say, it’s about relating to ourselves, and being more forgiving and compassionate to ourselves.

We are all perfectly imperfect. I think he particularly speaks to me as I never feel good enough.

Once we accept a sense of a power, who loves us and wants us to love ourselves and others, life is better.

Well, it is for me. And his images, his metaphors, his rhyme! He’s just a brilliant poet.

Q – Thank you for coming along and sharing your wonderful insights, Rachel!

RK – A huge thanks to all of you, and keep writing – I can tell from the fluency and thoughtfulness of the questions that there are some great books in gestation. Good luck! 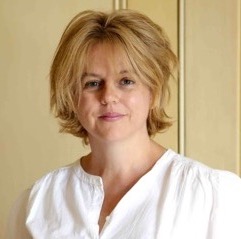 Rachel Kelly’s memoir, Black Rainbow: how words healed me – my journey through depression, is published by Hodder & Stoughton and is available from Amazon. All author proceeds go to mental health charities SANE and United Response.

The Black Rainbow app is available free for download on the Apple App store and Google App store.

Walking on Sunshine: 52 Small Steps to Happiness is published by Short Books and is available on Amazon.