Q – Hi Sarah, thanks for coming along! What sort of research did you undertake to really get to grips with Marnie as your main character?

Sarah Hilary – Oddly enough, I didn’t research for Marnie at all. I concentrated first on making her feel real as a woman, and then I retrofitted the police stuff to be sure of accuracy.

Lots of people keep character study diaries, and I can see the appeal of that, but I prefer to be surprised by Marnie as I’m writing her.

Q – Do you fantasise about film deals? If so, who do you see playing Marnie?

SH – I’d love Natasha O’Keeffe to play Marnie. She’s not very well known, but she was in Peaky Blinders, and Sherlock.

Q – How important it is to have a likeable protagonist in a crime novel?

SH – I think after the unreliable, unlikeable narrator buzz around Girl on a Train etc., it’s become far more acceptable for them to be less than perfect. When I re-read Someone Else’s Skin recently I was quite shocked by how spiky Marnie is.

She’s really softened as the series has gone on. I think you need to remember that the central character is carrying the story, and you need to have a touchpoint somewhere within them for the reader to reach out to.

That still leaves a lot of leeway, though.

Q –  I definitely agree. It’s interesting to see how far it can be pushed. I found Marnie’s lack of apology so refreshing in a female lead – even though her internal dialogue is often softer.

SH – Thanks! What I’ve found interesting about Marnie as the series develops is how she’s becoming softer and stronger, at the same time. She’s very emotionally fragile in book one, which partly explains her defensive manner.

She doesn’t lose her direct manner of speaking, however, you’ll be glad to hear.

Q – What do you think is important in the characters surrounding the protagonist?

Do you have any rules of thumb about the types of characters who should be represented in the story, or is it more a case of who comes into it naturally as you’re writing?

SH – Support characters are key, I think. Some of my favourite scenes to write in my series are those when Marnie and Noah are reacting the crimes together.

I think the hero needs a sounding board, someone who will push back against their theories, but also work in interesting ways together.

There should be friction, but not conflict – at least not in large doses.

Tom Bromley (tutor) – Certainly with a lot of police work, it is a team effort, so getting those relationships in there is important.

SH – I’m always being encouraged to have more police team work in the second draft of every book. I love writing Marnie’s boss. If you want a masterclass in supporting cast though, read Mick Herron’s Slow Horses series.

Every character is a joy.

Q – Do you have any tips on plot creation? Is there a secret to balancing the necessity of having an interesting plot, without being over-complex?

SH – I don’t plot as such. I do a rough story ‘treatment’, and then get stuck in. I do, however, keep lots of notes of possible twists, and I try to have at least two really good ones that are fundamental to the story.

TB – My experience is that different writers respond to different levels of planning: some like the security of having things mapped out, while others like the freedom to explore.

I like to know the direction of travel, but I always make sure to give myself space to change the plot, as it often does as you write!

I interviewed Cal Moriarty recently. For her debut, The Killing of Bobbi Lomax, she meticulously planned the first half, but she left the second half wide open.

She said she enjoyed writing without planning much more, although she had a planned base to work from.

I actually used to do a lot of writing in cafes.

Q – I was wondering if you still experience doubts when you’re writing, and what you do to overcome that. A lot of the time I find myself abandoning what I’ve written by chapter three, and end up thinking of something else to write.

SH – I absolutely get that. There’s that moment when it’s a blank screen and that’s daunting. Then there’s the 30,000 word wall that nearly every writer I’ve spoken to experiences – with every book – where you start to feel that it’s rubbish and can’t be done.

You just have to push on, push through, keep finding words and trust your characters to present you with twists and turns.

TB – I think that if you don’t have those moments of doubt when you’re writing, you’re probably not doing it right.

Q – I’ve just completed the first draft of my book, and I’ve already been thinking if I should start something new.

SH – You should always start something new! That doesn’t mean you won’t go back and polish the existing manuscript when you’re ready, but there’s nothing like having a new project to spark your creativity, and the simple act of writing anything will make you better at it.

I must have written around a million words before I wrote my first publishable 100,000.

Q – I’ve seen differing opinions on word counts for certain genres. Do you advise trying to stick to a general maximum, or let the story dictate its own length?

I wouldn’t advise submitting a 150,000 word book unless, of course, it’s sensational.

TB – On word count, I’d say a story should be its natural length. It can be difficult when you go below 70,000 words, as it can feel a little short. I also know some agents won’t look at manuscripts over 120,000 words.

SH – I actually used to do a lot of writing in cafes. I quite like the white noise. Now, I’ve trained myself to sit at my desk at home. I don’t need peace, as such, just the discipline of not being allowed up until I’ve done my work for the day.

TB – There’s a great article on lithub.com by Jo Nesbo about how he created the perfect writing room at home. He finds that he can’t write in it, and decamps to the coffee shop round the corner instead.

Q –  I tend to find I have a dozen ideas in my head at any time, and it’s hard to know where to start or which one to choose.

Do you find that your next subject/story chooses itself from life events, or does it lead from the last book you wrote, given that it is part of a series?

SH – The further I go into the series, the more the next idea starts planting itself quite early. The story for No Other Darkness, though, came from reading a real-person account of something horrific in a newspaper.

It got into my head and wouldn’t let me go until I wrote it.

TB – Make sure you write all those wonderful ideas down! I have a notebook full of them, otherwise I forget.

Q – Thank you both for answering our questions! It’s been most elucidating.

SH – My pleasure, I’m glad to have been of help! 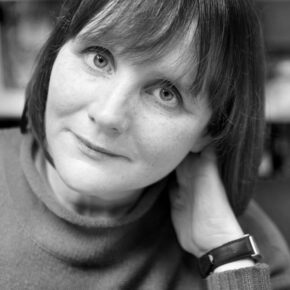 Prize-winning crime fiction author Sarah Hilary is guest tutor on the Professional Writing Academy Introduction to Writing Crime Fiction course. Her debut novel Someone Else’s Skin won the Theakstons Crime Novel of the Year 2015. It was the Observer’s Book of the Month (“superbly disturbing”), a Richard & Judy Book Club bestseller, and has been published worldwide. No Other Darkness and Tastes Like Fear (the second and third books in the Marnie Rome series) are out now.

Explore the conventions of crime fiction and your potential.