Q – Hi Chris, and thanks for joining us! To start off, would you tell us a little bit about your background? How did you come to be a writer?

Chris Fielden – Pleased to be here! I started writing when a friend of mine was involved in a bad motorcycle accident. I was an unemployed rock star at the time and went to visit him a lot in hospital.

He was often out of it on morphine, so he had a crash diary by his bed and I used to write funny stories in it for him to read when he woke up.

From that, I became hooked on writing stories. I then did a Writers Bureau course, got a few stories published and developed my website. It kind of grew from there.

Q – In a crowded market, how did you get noticed as a newbie?

CF – Short story competitions, mostly. My first success was with Writers’ Forum, a great UK print mag. They run a monthly competition and have good distribution and readership.

They also publish any style or genre, so it’s a great competition to try. There’s a £300 top prize too!

They also offer very reasonably priced critiques, which means you can get feedback from the judges. The feedback is terse, but very focused and useful.

Q – I’ve tried Writers’ Forum a couple of times! No luck, of course.

CF – Ah, you have to keep trying! I entered three times before I got anywhere. I got their critiques, learned from them and improved my stories. That approach worked for me.

I’m a member of a local writing group. Since I started sharing work and editing comments, my success rate with submissions has doubled!

Q – I did think the critique was good considering the low price. The first one included the comment that I had ‘talent’, so that was pleasant to hear.

CF – Never give up – it’s the most common bit of advice I give. I’ve developed skin like a rhino’s now, so rejection just bounces off.

Scribble is worth looking at too. That’s a community magazine. Readers give feedback on all the stories in there, so it helps you learn as a writer and think like a competition judge. That can really help your writing.

Q – When you’re taking time away from a first draft, what do you do? Write a new story?

CF – I mainly write short stories, so yes. I complete a draft, work on something else for a bit and then come back to it.

I’m also a member of a local writing group. After the second draft, I send it to them for critique. There are six of us in the group.

We all give feedback on each other’s work and it really helps. Since I started doing that and editing on comments, my success rate with submissions has doubled!

Q – In a competition with a theme, would you normally write the story to order, or see if one ‘fits’?

CF –  To be honest, I rarely enter competitions with themes as it just doesn’t work for me. My head’s so full of ideas, I prefer to write what I want.

That said, I do write with a target market in mind. I think that’s important. It helps you focus and create something that has a good chance of being published.

Still, themes do work for other writers, so if it works for you don’t let me put you off! Everyone is different.

I usually write with a specific publication in mind.

Q –  Do the members of your writing group have similar tastes? I guess that’s my worry about groups and the feedback from them.

CF – My writing group is made up of people with incredibly diverse tastes. Some write humour. Some write horror. One concentrates on feminist themes. A wide range of tastes is important, I think.

Q – Which authors have influenced your writing the most? Personally, I love Maupassant.

I love writers with imaginations – people who will always deliver something I’ve never seen before. I find that incredibly inspiring. Oh, Philip K Dick too. He’s a legend.

Q – When you say target market, is that a specific magazine? If you don’t sell it to them do you try someone else?

CF – Yes, I usually write with a specific publication in mind, if I can.

Obviously, that’s not always possible as inspiration strikes when it strikes — it doesn’t wait for you to finish your research!

If I’m unsuccessful with the first publisher I try, I research other markets that might be appropriate and then maybe edit and tweak the story to suit if necessary.

I rarely plan short stories. I just try to write with an end in mind. I know where the story is going, but it allows the characters and plot to develop organically.

Q – How long do you usually spend on short stories, and how does that break down into planning, writing, editing?

CF – The length of time spent writing a story varies hugely. The quickest I’ve ever finished one is a week. The longest is six months.

The one that took a week was a crime/zombie story. It was planned from beginning to end, so it was very quick to write. Well, the first draft, anyway.

I always spend longer editing than writing. Sometimes I’ll go through a story 50 times before I’m happy with it…

Honestly, though, I rarely plan. I just try to write with an end in mind. That means I know where the story is going, but it allows the characters and plot to develop organically.

That’s short stories for you, though. For longer works, I always do a plan first. I find I have to, or the story will derail itself and end up not getting finished.

Q – Do you usually start with a situation and expand from there, or have an ending in mind first? Before you answer, my guess is that it varies.

CF – It certainly does vary! I often spend a lot of time thinking about the characters before I write, so I know how they will react to situations and what they might say when I start writing dialogue.

I think having strong characters allows the reader to suspend their disbelief, become immersed in the story and enjoy reading.

I’ll usually have an initial scene in mind, the conflict and a good idea of the characters. Still, that often changes once I start writing! I think everyone is different, so you just have to find what works best for you and go with it.

I know a few writers who love starting stories, but don’t finish them. People like that need to plan, so they know what will happen and can finish the story.

Others seem to work better when there is no plan, or just a vague idea. There is no right or wrong way of doing it. I’d just recommend trying lots of different ways so you can see what works best for you.

Always know your character and make them react as they would react. Don’t have them doing or saying things because it’s what the plot needs.

Q – What are your feelings about simultaneous submissions?

CF – I do simultaneously submit work when I can, or if I think a publisher’s turnaround times are unreasonable.

If it’s a prestigious prize or magazine I’m submitting to, then I don’t submit elsewhere unless they state they are happy for me to do so — I wouldn’t want to be blacklisted — but for smaller publications and competitions I sometimes do, even if they ask you not to.

The likelihood of being accepted in two places is really slim. I’ve only ever had it happen once, and when I got accepted by the first publisher I instantly wrote an apology to the other and withdrew my submission.

Q – Do you have any tips for writing credible dialogue?

CF – My biggest tip would probably be to read your stories out loud. That’s the best way to see if the dialogue is easy to say (and therefore read) and if it’s believable.

Always know your character and make them react as they would react. Don’t have them doing things or saying things because that’s what the plot needs.

Performing stories at reading events is a really good way to gauge if your dialogue – and your writing for that matter – is working. From the audience’s reaction, you can often tell where you need to make improvements

If a covering letter is asked for, I provide one and get the information across as concisely as possible, in my own voice.

Q – How do you see the future for physical publication of short stories? Physical books seem to be hanging on, but magazines seem to be dying by the week!

CF –  I think there will always be a need for books. Too many people, myself included, like to hold a physical book.

That said, the eBook market is huge. So, as an author, I always ensure my books are available in every format — print, ebook, download etc.

That means you are catering for all tastes and won’t lose any potential sales. Very important!

Q – Do you normally contact the editor with a covering letter, or do you just submit the story itself?

CF – It depends on the submission guidelines. If it’s a competition, you are rarely asked for a covering letter.

Still, I always take the time to write a polite, well written, typo-free email. That basic level of professionalism does make a difference. I know, as I run and judge a competition myself.

If a covering letter is asked for, I do provide one and get the information across as concisely as possible, in my own voice.

As I write humour a lot, my tone is often light and sometimes humorous, if I think it’s appropriate.

The only reason my stories get published now, really, is that I kept trying.

Q – How long did it take to go from beginner to regularly selling stories?

CF – About a year. I think… It’s a bit hard to remember. The first few stories I wrote weren’t very strong, so they got rejected. I was still developing my voice and style and learning the craft.

I’d written a novel before that, and had it professionally critiqued, which helped a lot. If you include that (which took three years) you could say four years. But one year from when I first started writing short stories seriously.

Again, never give up. That’s the only reason my stories get published now, really. I kept trying.

It’s tough sometimes, but you have to ignore doubt, keep writing, keep editing, keep getting feedback and keep submitting. You will be published if you do!

Q – Thank you, Chris! You’ve given us some great tips, and a good insight into how to become a short story writer.

CF – Thank you all for coming along, it’s my pleasure! 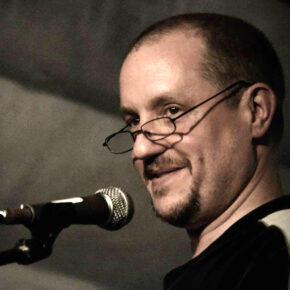