Q – Hi Tim, and thanks for joining us! It’s been quite widely publicised that Twitter inspired your novel What She Left, which you wrote under the name T.R. Richmond. Can you tell us how that came about? How long did it take to write?

Tim Relf – Happy to be here! That’s true. The original idea came to me when I saw a tweet by someone about the piece of music they’d like played at their funeral.

That got me thinking — what else could I learn about this person on Twitter? That in turn took me to the idea of reassembling a suspense story from a young woman’s digital and paper trail.

As for how long it took — I worked on it for about two years, but like a lot of writers I also had a day job, so I had to fit it around that.

Q – How did the creative process for your book move from that point?

For me, it was the other way round. It went structure, story, character.

Q – How much research do you do for your writing?

TR – Quite a lot! Essentially, I tried to get totally in the head and under the skin of my two main characters. One was a young woman, the other an ageing male academic.

I tried to form a picture of all the little details of their characters: who they’d vote for, what radio shows they’d listen to, what would make them laugh…most of that stuff never made it into the book, but being aware of the small stuff helped me make decisions for them on the big stuff.

I wanted to write a book that reflected the way we communicate these days.

Q – How did the structure make it easier to construct the audit trail that created the story and character?

TR – I wanted to write a book that reflected the way we communicate these days.

After all, this has changed more in the past 25 years than ever before. Information and news comes at us in piecemeal, episodic ways from a multitude of sources so I thought I’d try to build that into the way the book was constructed.

It felt like a giant jigsaw puzzle at times, and quite often looking at it gave me a headache…

Q – You used social media content, forums and blogs in the book. Was this something you were comfortable with before? If not, what sort of research did you do?

TR – I certainly wasn’t an expert but I had a passing knowledge of it. I enjoy using Twitter, for example, but it can be very distracting and writers are very good at procrastinating as it is – we don’t need any more distractions!

The other thing that’s brilliant about social media is the support and networking opportunities it offers writers. It can be a lonely job, and I’ve met so many supportive writers on social media and learnt so much from them.

Q – Do you think being active on social media is essential for aspiring writers?

TR –  I don’t think it’s necessarily essential for aspiring authors to be active on social media, but there’s a lot to be learnt there and it can be a lot of fun.

Q – I’d love to hear more about juggling your day job and your writing. I think The Times mentioned in an article that you had written two other novels a decade or so ago. Did you continue to write throughout that period?

TR – Yes, I did continue to write through that period, although I probably lacked a bit of focus and direction. I managed to complete one book in that period which never got published — probably just as well!

Sometimes it’s hard keeping going, especially if you get knocked back, but you just have to keep at it.

Q –  How many hours per day/week you devote to writing.

TR – When I’m working on a project, I will always do some writing every day. It might only be 20 minutes, but I think it’s important to keep it bubbling away in your head.

Everyone’s got a different routine and a time that suits them best. I love early mornings, so when writing What She Left I typically grabbed an hour or so before work.

It’s probably a mistake to write ‘for the market’, or to twist your book into what might be a more publishable shape.

Q –  Is there a particular author whose style you have been influenced by?

TR – That’s an interesting question. Someone gave me the advice once to avoid reading too much of any one author when you’re writing, as it’s easy to subconsciously pick up on their style.

Obviously, we’re all influenced by lots of people, but I try to read different authors (and different things, ie. novels, short stories, newspapers, magazines) when I’m writing to try to avoid this.

Q – I often worry that I’m too focused on the authors I love and the genres I find comfortable. Good advice to try and mix it up.

TR – We all have authors we’re obsessed with, don’t we? Carol Shields is one of mine.

Q – Do you write books always with a view of getting them published, or do you just want to write stories?

TR – I think, first and foremost, you have to write the story that you want to write and that you feel most strongly about. It’s probably a mistake to write it ‘for the market’, or to twist it into what might be a more publishable shape.

However, authors don’t write in a vacuum, and a lot of brilliant authors are very aware of the commercial realities of the book business. Also, I think if you understand the commercial mechanics of the book trade, publishers and agents will like you more.

Q – There’s been a well-received audiobook version of What She Left produced – do you think Emilia Clarke is a good fit?

Q – What’s the most useful piece of writing advice anyone gave you when you were starting out?

TR – Probably to show other people what you’re writing and listen to what they say. It’s a balancing act – you have to be true to your vision but take on board their comments. Make sure to enjoy it, too. We write because we enjoy it, so enjoy the process as well as the end result.

Q – Tim, you’ve been fantastic, and given us some great answers. Thank you!

TR – No problem, and good luck! 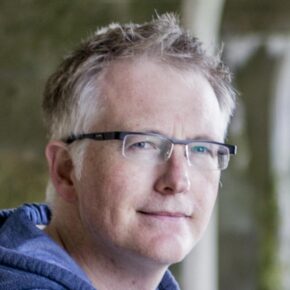 Tim Relf writes fiction as T.R. Richmond. His novel, What She Left, was published by Penguin.

A psychological suspense story, it sold to publishers in 21 countries and was turned in to an audiobook starring Emilia Clarke and Charles Dance from Game of Thrones. The Guardian called it “extraordinary”, the Sunday Express dubbed it “addictive”, while The Telegraph described it as “a deliciously modern take on the psychological thriller”.

Tim is an award-winning journalist and has written for the local, regional and national media, as well as the business and consumer press. The Daily Telegraph, GQ, The Bookseller and BookBrunch are just four of the places his work has appeared.

He lives in Leicestershire with his wife, two cats and badly behaved golden retriever called Dudley.

When he’s not writing, you’ll find him gardening – and these two passions came together when he won the 2019 Garden Museum/Mollie Salisbury Cup memoir competition.