When I enrolled in the Short Story in a Weekend course with Tom Bromley at Faber Academy in February 2019, I had no idea what it took to write a short story.

I had never written one before, other than a few half-hearted attempts way back in high school, and that was kind of the point – I had been working intensely on my novel manuscript and wanted to do something a bit different.

The course also sounded like a mini-writing retreat; that was definitely part of the appeal. I went out and bought extra tea boxes and coffee tins to prepare. I always need a mug of something nearby to be able to write.

I have long been intimidated by short stories — they’re just so short! There’s so little room for error! — and I was nervous starting out, but that feeling dissipated quickly. The course is designed to chug along, so there’s not a lot of opportunity for hand-wringing.

Most importantly, as anyone who’s done a short story writing course before — or any writing course for that matter — knows how connecting with other writers has a revitalising effect.

The course overall consisted of reading material, podcasts and videos, discussion, writing assignments, and peer feedback. I had never used a Pomodoro Timer before, and it was an eye-opening exercise, to say the least.

I wish I’d been able to participate in the real-time chats with the others and with our tutor, Tom, but due to my location and the time difference, I chose to read the transcript afterwards instead.

The weekend was all-consuming and immersive – by the end I felt like I’d spent it in a foreign country. And as you can imagine, that feeling came with quite a bit of newfound perspective.

I think short stories (probably flash fiction as well) are a great medium for honing this skill, but by now I’ve taken many such ideas from the writing course and applied them to my novel and other projects too.

This segment had a profound impact on my thinking: Inspiration is everywhere, from mundane observations to fleeting thoughts. A snapshot of everyday life, with just the right touch by the writer, can be turned into something surreal.

While novels generally need a certain underlying framework from the outset, short stories have more give. They can be anything, especially the first time around. And therein, I think, lie both the dangers and the exhilaration of writing them.

I was also deeply affected by our assigned reading. I actually keep a few choice lines pinned to the corkboard above my work desk even now: Babel’s ‘No iron can pierce the heart with such force as a period put just at the right place’, for example. I love the notion of absolute, brutal precision; of everything in a piece being deliberate and not accidental.

I think short stories (probably flash fiction as well) are a great medium for honing this skill, but by now I’ve taken many such ideas from the course and applied them to my novel and other writing as well.

Finally, Tom’s main assignment for us was to write a story using an object as our starting point. I think I used eyeglasses because I was literally looking at my eyeglasses at the time; they were just sitting there on my desk. This highlights the beauty of the course: it forces you into such a tight ball of space and time.

You don’t have the luxury of sitting around waiting for your muse to speak to you, or of losing yourself down research rabbit-holes (as I tend to do). You have to grab whatever happens to be there and squeeze a story out of it. And – harking back to what I said above – that’s often how short stories are born.

When I was selected I didn’t quite believe it, and even now there’s some part of me that still doesn’t believe it, but it’s out there, in the Spring Issue (#85).

The process with Mslexia

I received lovely feedback on my story from two writer friends whose opinions I value highly, but I wasn’t sure how other readers would take to the ending. In the autumn, I entered “The Eyeglasses” into the 2019 Mslexia Short Story Competition on a whim; I’d seen that Irenosen Okojie was the judge and by then I had read her work and been blown away.

When I got word from Mslexia that it had been selected as a runner-up – and that it would be published in their upcoming issue – I read and re-read the news before shouting it across the room to my bewildered children.

I didn’t quite believe it, and even now there’s some part of me that still doesn’t believe it, but it’s out there, in the Spring Issue (#85). I encourage everyone to grab the issue and read the incredible winning story by Isha Karki and those of my two fellow runners-up. (It goes without saying, but also read Irenosen Okojie if you haven’t already.)

I also highly encourage you to give Short Story in a Weekend a try. Last February I wouldn’t have been able to fathom that something I viewed as a diversion from my novel manuscript would change the way I thought about writing and earn a place in a short fiction competition.

Not to mention, the course is also the perfect antidote for anyone who’s worked themselves into a writing rut elsewhere – and it happens to be a great excuse to hunker down, take a weekend off from real life, and binge – and I do mean binge – on tea and coffee. 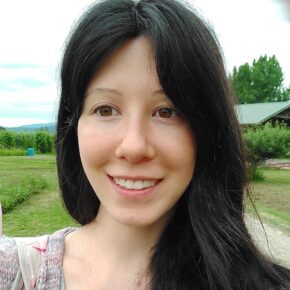 Kristen Loesch grew up in San Francisco and Seattle. She holds a Master’s degree in Slavonic Studies from the University of Cambridge, where she also completed not-quite-half of a PhD.

Recently signed with Zeitgeist Agency, she lives in the USA with her husband and their three children.