When Stephanie Rouse’s Faber Academy Work in Progress online course was approaching its end, she knew she was going to miss the virtual community she had become part of.

“I had been a member of a local writing group for more than a year”, says Stephanie.

“We called ourselves Write Club — the first rule of which was “do not talk about Write Club” — and we met fortnightly with the mission to help one another be the best writers we can be.

“I asked my colleagues if they knew of a radio show or a podcast about writing and being a writer, as I felt belonging to a real community like the one I was part of with Faber Academy provided great support for those looking to improve and grow as writers. Unfortunately, they didn’t”.

So, Stephanie took it upon herself to create her own.

I asked my colleagues if they knew of a radio show or a podcast about writing and being a writer, as I felt belonging to a real community helped me grow. Unfortunately, they didn’t.

A podcast for writers

“Write Club: The Podcast is a magazine programme for writers and readers everywhere”, Stephanie says.

“While our group is entirely female, we’re aiming it at as broad a spectrum of listeners as possible. In the podcast we discuss techniques and ideas, read and critique our own work, interview and debate with people from the writing and publishing world and, above all, we have fun.

You don’t have to be a writer to find the show entertaining, either. We’ve had plenty of non-writers who have told us they are enjoying the insight to our world, and love the conversations about books”.

“We’re new to this”, says Stephanie, “so we’ve been on a steep learning curve and I won’t pretend we’re quite at BBC Radio 4 production standards — yet.

However, we’re passionate about our aim to build a community of like-minded writers and readers”.

“Our first ten shows are in the editing process, and we have been learning as we go. We’re now developing the next ten shows with the benefit of that insight, and they can only get better!

We’ve got plenty of interesting guest contributors lined up to share their knowledge with us over the coming months too, so it’s not just us you’ll be listening to — although we’re fairly entertaining, if I say so myself”.

We discuss techniques and ideas, read and critique our own work, interview and debate with people from the writing world and, above all, we have fun.

Write Club: The Podcast is available for free on iTunes and Stitcher, or visit WriteClubThePodcast.com to listen on audioBoom. Also free to join is the Write Club Facebook group, where listeners can discuss any points of interest with fellow members.

The group is an integral part of the club’s main objective of creating a community of writers, so anyone who is interested is welcomed with open arms.

The Faber Academy Writing a Novel: The First 15,000 and Work in Progress online courses — which opened Stephanie’s eyes to the advantage of having the support of a tight-knit writing community available online 24/7 — are designed for intermediate to advanced writers looking to step up their game, and start writing in a serious way.

We’re passionate about our aim to build a community of likeminded writers and readers.

Just who’s in the Write Club, then? Below are some short biographies of the group:

Stephanie Rouse describes herself as a writer, reader and daydream believer.

She’s close to finishing the first draft of her debut novel which she worked on with two Faber Academy Novel writing courses – Writing a Novel: the First 15,000, and Work in Progress.

When she’s not staring at a blank screen waiting for her muse, she likes to cook for crowds.

Nicola Cairncross has a day job as a digital marketer running her own business and, as part of that enterprise, has published five business books. She’s a dedicated sci fi fan, an avid reader but brand new to writing fiction.

Pat Woolfe is a teacher of English & Drama, a reader, an actor and a wannabe writer – not necessarily in that order. She’s hoping to shed her ‘wannabe’ status. Pat is also the resident grammar policewoman for Write Club.

Heather Worsley, a nurse, first put pen to paper when she helped host a therapeutic writing group at her local hospice. She says despite being on the steepest learning curve, she is delighted to be part of the Write Club group.

Heather hasn’t been able to appear on the podcast yet, but she’ll be featuring in upcoming episodes.

Linda Jackim Werlein grew up in the foothills of the Appalachian Mountains. She retired from the publishing industry and began to write the Great American Novel in 2001. She expects to finish it next Thursday. When she’s not procrastinating, she’s thinking about it.

Theresa Stoker has been a nuclear scientist, a lecturer, mother and worked in the theatre. Her true vocation, though, is Beach Bum and she can often be found reading on a beach. As well as writing she enjoys walking and handicrafts, and is a mean Scrabble player. 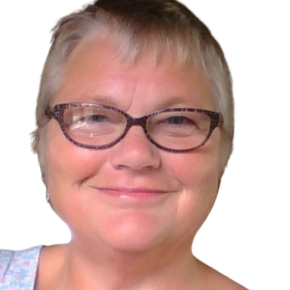 Living part of the year in mainland Greece and part in England, online study with Faber Academy was the perfect solution for Steph Rouse who wrote the first 15,000 words of her novel, Hellingly, while on the Faber Academy Writing a Novel:the first 15,000 online course and has since added another 50,000 words during the Work in Progress course. She lives with her husband and a neurotic cocker spaniel called Wilfred Owen. A voracious reader, Steph describes herself as a poor poet, keen cook, rugby Mum and Granny.

When Steph was coming to the end of her Work in Progress novel-writing online course, it was a time of celebration and satisfaction, but she couldn’t help worrying that she’d lose contact with the large, supportive community she’d become part of over the last year. To remedy that, Stephanie began to record Write Club: The Podcast with her writing group, and form her own writerly community.